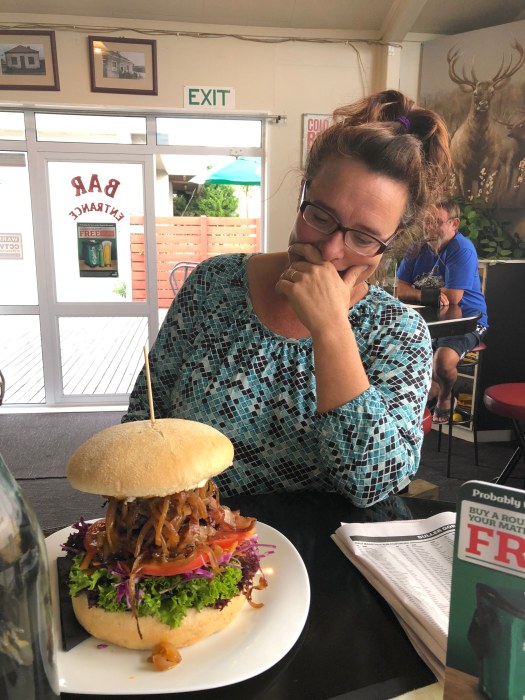 I was mortified. I was on my own in a busy West Coast pub, chock full of people enjoying a nice Friday night meal, and it seemed like half of them were gathered around me, laughing, and taking photos to pop up on Facebook. Feckers.

In front of me was the largest damn burger I had ever seen. It must have been nearly a foot tall. The burger buns were the size of elephant feet. There were inches of fried onions taunting me. And I’d ordered this monstrosity thinking I’d fuel up for the Buller half marathon I was due to walk the next morning.

I ate a quarter of it and saved the rest to take home for my chickens. I took great delight in giving it to them.

When my friend finally turned up I was trying to ignore the now tin foil wrapped tower, as I ‘casually’ read my novel.

“The most enormous burger I’ve ever seen, and they wanted me to eat it!” I whisper- wailed.

Yes, I kept my description short ‘n sweet because sometimes that’s the best way to share your news. I like to call it: K.I.S.S. – keep it simple, sweetheart. 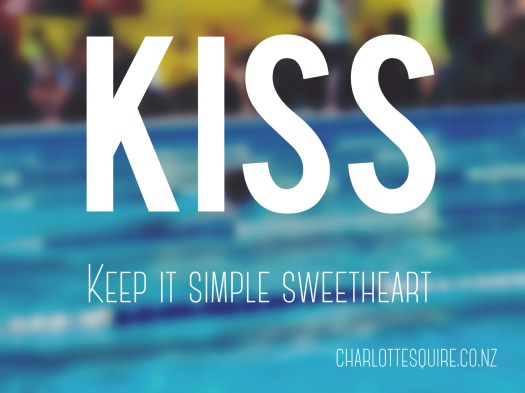 Years of writing short ‘n sweet articles has helped me hone my story telling so that I can quickly understand the key point or points I need to make and prioritise them. You can do this too, you only need a few tools.

One trick I use is to imagine I’m summarising my story to a friend, in this case: I was on my own at a pub and accidentally bought an enormous burger that I had no hope of eating, which drew far more attention than I was comfortable with.

First point: the burger was bigger than I’d expected. Second point: people started to look, laugh and point phones at me.

Another trick I use is to brain dump the key points I want to make, then prioritise them from most to least important. Then I elaborate on each point as I write. It’s great to get the information out of my head and onto something I can see.

Finally – just let the first draft flow out of you onto the screen or paper. Don’t over think or judge that first draft as that’s the juicy emotional part. Fine tune it only after you’ve gotten that first draft down and take all the time you need.

Often going the K.I.S.S. way makes life easier for everyone, especially you.

Remember: keep your communication clear, kind, and honest – and build that one thing that money can’t buy – strong community.